Cookies help us deliver our services. By using our services, you agree to our use of cookies. More information

From Word Craft
Jump to navigation Jump to search 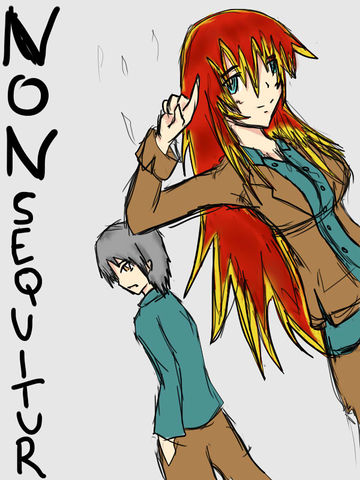 A boy wake up from his dream

Questioning the sky that lies above him

"Why does it have to be unreal,

Even though it's more ideal that reality?"

He closes his eyes once again

And the world around him began anew to follow his will

A girl opened her eyes at an unfamiliar place

Questioning what happens to her life up until now

"Why do I not realize the reality,

Even though I'm living on it all this time?"

And the world welcome her by spreading unlimited amount of hopes

This is a tale of fate

A string that tied oneself with another

This is a tale of life

A wheel that spun as if it was restless

This is a tale of world

A place where everyone gather as one

Looking at each other, they smiled

Now that there're two of them, boredom and loneliness vanished

A story of adolesence's qualm and question. A story that revolves around world, life, and fate. And a story about sense of belonging..